Are You Ready to Work On Your Relationship?

The honeymoon is over. You're relaxing enough to be yourself. You're not on your best behavior any more. And you're finding each other less than perfect and feeling disappointed and a little dismayed. You've been together ten years and you're wondering where the magic went. Your partner's little habits are irritating you quite a lot. You find yourself having conversations in your head in which you make all those pithy statements that will make your significant other do exactly what you want to make you happy. But when you let those zingers fly, you're the only one following your script. Too often, it ends in yelling and tears. The kids are grown and gone. It makes sense to take early retirement, and you've been telling each other it will be a great chance for some quality time at last. But you've been so busy the last few years that you've any more. Your patterns, your pace, what you like to do are not in the harmony you remember back when you both were younger and the times were different. What are you going to do?

Once upon a time, relationships were simple. You fell in love with someone of the opposite sex, and if your love was returned, you got married. You had kids and raised them, you worked and then retired. Or was it so simple? I suspect that all those adult children of dysfunctional families who have been so vocal about their childhood pain in the past twenty years are the same kids whose parents stayed together "for the sake of the children." I have had clients tell me, "I prayed they would get divorced." In the 21st century, we have become both complex and outspoken. Everybody's lifestyle is a little different from everybody else's. Finding common ground can be difficult. Even having a meal together can be difficult, if you're a vegetarian and your date is a hypoglycemic who has to eat protein every couple of hours. And in relationships, we've seen it all: the guy who craves excitement and fears commitment; the single girl who had a long string of stepparents and sees marriage as a recipe for failure; the man or woman still recovering from physical or sexual childhood abuse, understandably afraid to trust; the gay couple whose families gave them a hard time when they came out; the transgender activist, Sheldon who used to be Sheila--or Sheila who used to be Sheldon--and still has the same girlfriend--or boyfriend. And the divorces: everybody gets divorced. More than half of all American marriages end in divorce.

Yet we still try to connect. We still want both passion and intimacy. We still want someone to stand by us, to have that feeling of wholeness that love can give, even as we insist on developing and esteeming ourselves. The women's movement taught women that they could have a partner without subsuming their identity in someone else's. The relational model of women's development, thanks to feminist psychologists like Carol Gilligan, pointed out that women are good at relationships and connection, that these are women's strengths.

Meanwhile, the men's movement taught men to reclaim the feeling side of themselves. And the recovery movement, expanding in scope from alcoholics and their families to everyone who grew up with what we learned to call a dysfunctional family, taught us that most Americans are codependent. We learned that codependency can stand in our way, that it can raise unrealistic expectations that guarantee we will always be disappointed in our partners.

Love isn't reading each other's minds, because we all have boundaries and differences. Love isn't never having to say we're sorry, because we need to take responsibility for our actions. Popular psychologists have given us their views on what makes a relationship work and what makes it fail.

John Gray, in Men Are From Mars, Women Are From Venus, tells us the problem is that we don't understand each other, that we must learn to communicate better along gender lines. Harville Hendrix, in Getting the Love You Want, tells us we're attracted to someone who matches our "imago" of both the negative and positive traits of our parents and the things about ourselves that we don't want to admit. We unconsciously bring our whole past into our love relationship, where if we don't bring it to consciousness and work it through it will continue to cause trouble. John Gottman gives us The Seven Principles for Making Marriage Work, claiming he can predict divorce with 91 percent accuracy if we don't pay attention to our partner's "lovemap " and make a habit of letting "repair attempts," such as being able to end a quarrel by laughing about it, succeed. Such books offer couples many exercises to help them think about and practice healthy ways of relating.And of course therapists, whatever their treatment philosophy, offer us couple counseling as well as group and individual support in working on our relationships.

Unfortunately, people whose marriages or committed relationships are in trouble tend to believe that if only their partner would change, if he or she would just read the books, try the exercises, come to couple therapy, everything would be fine. All too often, one partner is not willing to take these actions—and the other, who is, thinks it's only the significant other, not him or herself, who needs to make changes. Or one partner drags the reluctant other to the therapist, brings home the books which the other promises to read, schedules a time to do the exercises to which the other agrees—but nothing happens. And then the one who initiated the attempt at working on the relationship is angrier than ever. Often, he or she goes to the couple therapist with a laundry list of grievances, only to be told that being angry all the time, berating the partner about his or her faults, is a very poor way of trying to get him or her to be more loving.

Prochaska and DiClemente developed a theory about change that makes so much sense that it has spread widely in the past few years. They say that change takes place in stages. The first is the precontemplative stage: you're not even thinking about changing yourself. The second is the contemplative stage: now the idea of change has occurred, but you're doing no more than thinking of it. In fact, contemplation is all about ambivalence: part of you wants to change, but part of you likes the way you are just fine; or, at least, is fearful about what changing will be like and whether the results will be any better than the way things are now. Therapists who incorporate this theory realize that when you're in precontemplation or contemplation, there's no point in giving you a pep talk about how much better things will be or prescribing ways to practice new behavior.

First, you have to go through a process of exploring the idea that change might be needed, working through the ambivalence, and becoming motivated to make the changes. Only then do you reach the determination stage, in which you've decided you need and are ready to do something different, and the action stage, in which you do something about it. The final stages of the change process are maintenance, in which you keep practicing the new behavior or the new attitudes, thoughts, and feelings, and relapse, in which a return to the old ways may take you back to precontemplation or contemplation.

The stages of change are a good way to think about what's happening in your relationship. Suppose you and your spouse or partner have had a fight, and in the course of making up you agree that as a couple you need some help. At that moment, you're both in the determination stage. Or are you? Does either or you, or both, have mixed feelings about the thought of rocking the boat by looking closely at the way you are with each other? If you're ambivalent, you're no further on than the contemplative stage. Or suppose you're ready to pick up the phone—or get online—right now and make an appointment. You're moving from determination into action. Or are you?

Is your agenda to look honestly at yourself? Are you willing to change some of the things you do—which may range from refusing sex to insisting that the dishes be stacked the way your mother stacked them—if you learn they're getting in the way of a healthy, loving relationship?
If you think all the change should come from your partner, you're only in precontemplation.

Or suppose you've gotten some help, done some work. You're both happier and more content with each other, so now you can relax. Or can you? If you don't maintain ongoing consciousness about your role in the relationship and all you've learned to make it work, you may be headed for relapse. It's tempting to slip back into the old ways: indulging in contempt and criticism, controlling or having to get your way, provoking your partner to get attention, being impatient with differences. To maintain positive change, both you and your partner need to keep on practicing healthy behaviors, maintaining attitudes of openness and acceptance, looking at yourself with rigorous honesty, and at your partner with love.

Get vaccinated.
Enjoy the summer! 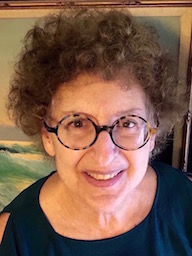